The Talkabout T460 two-way radios by Motorola are rugged enough for any outdoor adventure and are super handy to boot. In fact, they’re perfect for skiing, biking, fishing, camping and long hikes. These walkie talkies offer a longer range and simple, but powerful features that make them a must-have on your next outdoor adventure. While they aren’t exactly considered professional grade, their list of features and rugged body make them a top selling product and one of Motorola’s more affordable sets.

This set offers twenty-two channels, dual power NIMH batteries, real-time weather alerts, and PPT power boost, which extends the radio’s range. It also comes with Vibra call alerts, channel monitor, auto squelch, quiet talk interruption filter and eleven weather channels to choose from. The built-in flashlight is a great addition and one that allows you to be prepared for low light conditions when you’re outdoors.

These ultra-light walkie talkies weigh in at just 0.43 pounds and feature a durable casing that is designed to withstand rough use. This model is also weather resistant, so it’s able to easily handle light to moderate rainfall and snow, but it cannot be fully submerged. The walkie talkie’s antenna is fixed and cannot be removed. All of the ports on these radios have been sealed with a rubber flap, which can be opened when connecting to an earpiece for hands-free communication, or when charging.

The grip on these radios is also nice and allows you to easily operate the buttons even when wearing gloves. You’ll find a total of four buttons located on the left side that operate the push to talk low, push to talk high, flashlight and emergency features. The built-in flashlight is one of the more popular features of this set. While it’s not exactly super bright, it is bright enough to light the way in front of you or to read by. The other interface buttons are located on the front of the radio. These buttons include call tone, monitor and scan, menu, and mode.

The radio’s display screen is fairly basic but considering all of the options are icons it can take a while to familiarize yourself with the functions. With the interface, you can view a number of icon settings such as roger tones, call tone, weather alert, Vibra call, TxRx status, noise filtering, Vox, LoHi power, keypad tone, and lock. The included belt clips offer a strong grip and the overall design of the walkie talkies make then highly functional and sturdy.

On the box, you’ll find a range that says thirty-five miles, but this is only true for an unobstructed line of sight and optimal conditions. While the range of these radios can vary greatly, you can expect it to be very limited when hiking in mountains or dense forest areas. Around town, you’ll probably have about one to three miles of reception.

Other factors that can interfere with range include electromagnetic interference, weather, and terrain type.

Operating these radios is simple and intuitive, even for first-time users. When you press the mode button you’ll be able to seamlessly switch between NOAA weather mode and two-way communication. When you hit the menu button and +/- buttons, you’ll be able to change channels quickly. The call tone button sends out a ring to all walkie talkies that are operating on the same channel.  Selecting the MON buttons allows users to scan through all of the available channels or to scan a number of radios on different channels.

Once you’ve set your radio up and dialed it to your liking, you can quickly lock it by holding down the menu button for a few seconds. This feature is a must-have and prevents the user from accidentally changing channels.

The battery life for any radio is important, considering the majority of the time you’ll be away from any available charging unit. This model provides about ten hours of use with the NIMH batteries, or up to twenty-six hours of use with double A batteries. This type of charging versatility is definitely a bonus. In order to recharge the battery pack, you can use any type of USB charger. Just plug it into the USB port on the side of the radio and hook the other end up to your PC or laptop. 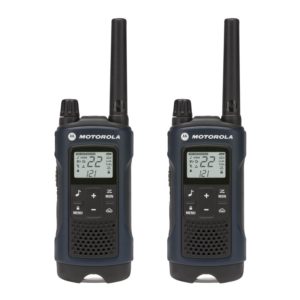 Pros: This set only consumes about half a watt of power when it’s idle.  Many consumers liked the fact that these radios use USB charging via the USB port, which makes charging more flexible, especially during traveling when users don’t want to bring along the large base charger.

Cons: Consumers had complaints regarding the set’s overall functionality. When it came to the transmit audio modulation on these radios, it was described as low. Another consumer mentioned that one of the units would often transmit at a lower volume. When using the scanning mode, it’s often slow at locking on to the channel of choice. These radios also emit a loud blast of static, each time it detects activity during channel scanning. According to many consumers, the blasts of static make this set unacceptable for hunting or any other type of activity where you don’t want to disturb your surroundings.

Consumers who are looking for a set of walkie talkies that are more hunting appropriate can learn more about the Motorola MR350TPR two-way radio set, which received a higher rating and is available at a comparable price.

Overall, consumers who purchased Motorola Talkabout T460 Rechargeable Two-Way Radio found that they performed well out in the wilderness, but it can take some time to tweak the setup and learn how to use these devices accordingly when you’re in an environment that demands extreme quite. Ruggedly built, reliable and packed with a ton of useful features, consumers who purchased this walkie talkie set gave it a rating of four and half stars out of five stars.